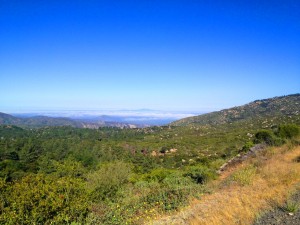 One of my favorite rides with consecutive left – right twisties, though we hit some traffic going down the mountain. Perfect weather and a great ride group!

Pines to Palms Highway (CA SR 74), scenic byway and favorite among riders, runs from San Juan Capistrano over the Ortega Highway to Palm Desert, CA (111 mi) at elevations over 5,000′; this portion of the road is East of Hemet — to Mountain Center / Idyllwild where it intersects with scenic byway Rt 243. Named after the Spanish explorer Sgt Jose Francisco Ortega, a portion of this well known road to all motorcyclists, appeared in “It’s a Mad, Mad… World, and holds the ominous claim to fame as one of the most dangerous highways in the state due to the sharp twisties and high traffic volume as an alternative to the longer freeway ride around the mountains.