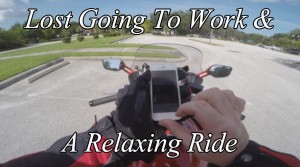 I had a late morning photoshoot, although nothing important, and it was at a new venue for me. Turns out they just did a multi million dollar overhaul and won’t be operation for another couple weeks so no shock I hadn’t been there before. I got there with plenty of time to spare though, even though it was about 20 minutes after my planned arrival time. Turns out there’s a couple sets of very similar road names REALLY close to each other and I had them mixed up lol! But it at least allowed me to use the GPS in the mount for the first time and it was perfect!