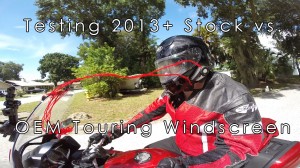 Following the intent of my Bar End Weights install video I wanted to show visually, exactly what the differences are between the airflow of the 2013+ stock Yamaha FJR 1300 ES windscreen and the optional factory OEM Touring windscreen. It’s described as straighter and 4″ taller with no increase in width. My tests show and I tell, what the effects are in the upper and lower positions of both.