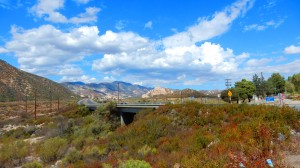 One of the best, if not THE BEST motorcycle twistie / scenic byways in Southern California! …….featuring the route from El Cajon Junction to Newcombs Ranch at 7,000’+!…. ACH / CA SR 2, is well known by all motorcyclists in the area, and a “perfect 66 mi ride” from Cajon Junction to La Canada Flintridge, and featuring great 25 mph caution turns, frequently located on the edge of cliffs with greater than 500′ drop-offs on either side. Round trip: 245 mi with 5 riders.

Construction of Angeles Crest Highway began in 1929. It was originally intended to be a fire access road. In 1941 construction stopped because of World War II. In 1946, after the war, construction resumed; the completed highway eventually opened in 1956. The road was constructed by prison labor from Camp 37, which has since been razed. Division of Highways (now known as CalTrans) staff lived at a site called Cedar Springs. Children of the staff attended Chilao Mountain School, a one-room school; the school has been closed for several years.