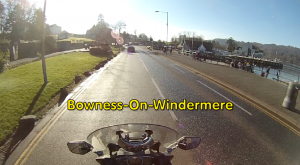 Welcome to our first proper ride of 2015! With a fairly good weather forecast after a few weeks of icy weather, we decided that we needed to ride!! We decided we’d like to visit our favourite area of Northwest England, The Lake District. On the way we called at our favourite bacon butty lay-by at Caton near Lancaster for a nice butty and brew. We met some bikers out on their bikes. One of them (3 were all called Paul!) was out on his brand new Honda 250cc trial bike he’d got for Christmas off his wife! Afterwards we headed back to the M6 motorway to resume our journey to Bowness. As I had found at the lay-by that the lens on the Contour camera was full of salty grime, I pulled into a lay-by on the A590 after leaving the M6. Even though the roads were generally dry after a week of night time frosts, there was lots of salt dust being kicked up into the air by vehicles in front of us.This is one BIG disadvantage of having the Contour on the top of my helmet. When we arrived in Bowness, we parked up and went on a walkabout. This time I had my cap mount fitted to my Yamaha 50th anniversary cap so I fitted the Contour to the cap. See part two of this series for the video of this part. We had lunch in our favourite Pub called The Albert. I had tomato and vegetable soup with granary bread and Lynn had jacket potato with prawns in a Marie sauce and salad. Very tasty. After lunch we went for a browse around the various shops in Bowness. Clearly the late Winter sunshine had encouraged lots of people to come out because it was very busy. Bowness is always busy as is Ambleside but you can still find some parts of the Lake District that’s still peaceful. We decided (well me really lol) to ride over the Kirkstone Pass to film the snow capped peaks. As it was, there wasn’t that much snow but it was non the less very picturesque. We carried on over to Patterdale and Gelenridding and although this series of videos ends at Watermillock on the A592, we carried onto the A66 and took the M6 southbound. At this point it had turned very misty and the temperature had dropped to 3 degrees. We were certainly grateful for our Gerbing heated under jackets! We hope that you enjoy the rest of the series. Please comment, like and Subscribe to FJR Biker Paul.