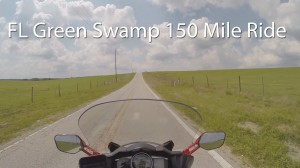 I got the urge to find a really cool local ride route that I could do witht he wife when we wanted to get out for a few hours or a full day of cruising and boy did I find one! The first thing I did was search for routes and tours and find some decent ones, but nothing REAL close. The best I found were variation of going around the Green Swamp which is about 25 miles away, so I worked around that. I knew of another route I used to take years ago when the wife rode and we went out with another couple so I incorporated that in to my new super tour! It ended up being about 150 miles of planned route, 180 round trip from my house which worked out perfectly, taking 3/4 of a tank with a very spirited ride 🙂 90% of it is very nice two lane backroads many in tree canopies and many more surrounded by farms, pastures, rolling hills and orchards. Lots of curves, everything from big 60MPH sweepers to tight 15MPH OMG WHO DESIGNED THIS ROAD ones! I used some route planning software I’ll detail in an upcoming video and it worked ok, but I won’t need it after doing the ride again. Eyebuydirect.com is the glasses site and you can use code IFXUJEB8EA to save more off an order!