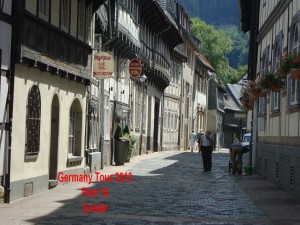 Welcome to part 10 of our trip! On this part we travel to the beautiful town of Goslar. Here’s some info about the town and it’s history.

The former Free Imperial Town of Goslar has an over-1000-year history. Probably the discovery of silver and copper ore deposits induced the Saxon and Salic emperors to establish their largest and most secure palatinate here in the 11th century. For centuries it was the favoured seat of government in northern Germany and at the same time a centre of Christianity. The spires of the 47 churches, chapels and monasteries delineated the town’s unique silhouette. It was referred to as the “Rome of the North”.

Still today the view of the townscape with the steeples of the five large parish churches is impressive when viewed from the knoll upon which the Imperial Palace stands. The many crooked, narrow, cobble-stoned streets in the Old Town are an adventure of their own, where each house tells its own story and secret nooks and crannies await discovery.

For visitors it is best to drive to the large “Kaiserpfalz Nord” carpark at the foot of the Imperial Palace (Kaiserpfalz). From here the impressive Romanesque Imperial Palace opens up to view. In the naturally scenic background the over 600-metre-high Rammelsberg Mountain rises. In it are the ore mines, which closed down only as recently as 1988. Since 1992, the mine and the Old Town of Goslar have been entered on the UNESCO World Cultural and Natural Heritage List for all Mankind.