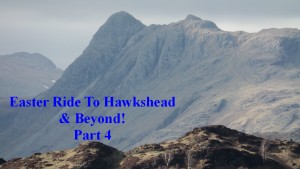 Welcome to the final part of our journey to the Lake District on Easter Saturday. On this part we depart Hawkshead and head in the general direction of Tarn Hows near Coniston. We stopped off at Tarn Hows to take some photos of this breathtaking area. After leaving Tarn Hows, we head towards Coniston where we take a very welcomed comfort break. We leave Coniston and ride along the banks of Coniston (Lake) itself. Coniston is where Donald Campbell lost his life on the 4th January 1967 whilst attempting the world water speed record. He reached 310 MPH when his craft called Bluebird flipped up and crashed killing Donald Campbell instantly. He remains the only person to set both world land and water speed records in the same year (1964). The whole facts are available on the web. After leaving Coniston we head for the A595 and ride through Penny Bridge towards the A590. We fancy having our Dinner out at a country Pub but expect them all to be typically busy because of it being Easter. We weren’t wrong! We tried the Swan Hotel in Newby Bridge but it was swamped with people. We ride along the A592 towards Bowness and decide to try a little Hotel/Pub in Winster near Windermere. This was of course busy AND you has book to reserve a table. Something to do in the future as we were impressed with the place. After leaving Winster, we rode through the Lyth Valley along the A5074. After trying the Gilpin Bridge Hotel for Dinner and finding the prices too high, we decided to head to Milnthorpe and get a chippy tea. Yummy! We left Milnthorpe after tea and headed home via the A6, M6, and M65. Lynn and me hope that you have enjoyed this series of 4 videos and welcome any comments and indeed suggestions for future productions. Thanks for watching! FJR Biker Paul.