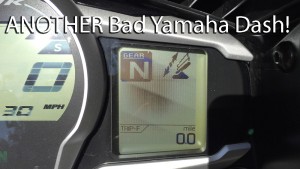 I am PISSED right now – 1 year and 2 months since getting a new dash assembly through Yamaha Warranty for my first defective panel, the replacement is doing the same thing!  I have heard from several other FJR owners, all in southern US states with the same issue.  I have also seen one Super Tenere, which uses the same part, with the problem – it was at the AIMExpo Demo fleet this past October.  I have the option of trying to fight to get it covered again even though it’s past warranty – BUT – it’s a huge PITA, taking my bike down for a month because Yamaha required the old unit to sent to Japan before slowly shipping a new one out.  Plus they don’t update the odometer so it would AGAIN be reset back to zero.  I decided to make a simple cover to prevent it from happening.  Luckily it was only out for 3 hours today and was not permanently damaged yet.  This is a prototype, I’ll make it pretty later.