This is a complete how-to vid showing you everything you need to convert your 2015 & prior Yamaha FJR1300 to the new 2016 slipper version.  This also gives you a clutch pull roughly 1/2 that of the previous years for a MUCH easier time especially in stop and go traffic.

Total parts cost is just under $300 as of the time of this video.  The graphic shows all the parts you will need to order circled in red, order from your supplier of choice. Order the Qty indicated on the supplier microfiche.

The order of part assembly for the stack is as follows:

On the basket, the flat washer then the sloped washer – note the printing, it slopes down. Then a new thin friction plate, a new clutch plate then the retaining wire.

On the spring assembly, a new thin friction plate then a new THIN clutch plate.

WARNING – make SURE you carefully remove the ball bearing behind the small pushrod after you remove it, and replace it when reinstalling.

NOTE – holding the rear brake should also stop the rear tire from moving, to remove/install the main nut. If you choose to use the 5th gear/someone sitting on the bike method of removing the center nut, you DO RISK DROPPING THE BIKE as it will be moving forward under pressure.  Installation is safe. 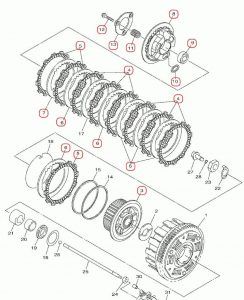 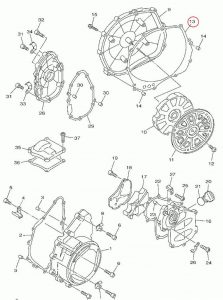